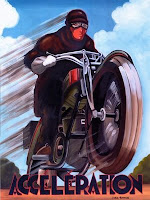 Amidst the worst economic crisis in generations (which conceivably may not be over), it’s easy to lose sight— not of the recovery, but of what’s really going on. The “new normal” is likely not a hopelessly stuck economy, but a technologically-fueled pace of change that’s far more dramatic, a future that delivers a constant stream of surprises, both “good” and “bad”.

The “new normal” seems to be an acceleration of change driven by red-hot technological innovations that interact with each other exponentially on a truly global scale, as Moore’s Law meets Metclafe’s Law meets learning curves. The result transforms the pace of scientific research, creative destruction, and cultural evolution.

Two recent articles highlight the change. John Hagel’s and John Seeley Brown’s research on the “The Big Shift” illuminate and quantify the impact on businesses and the economy. Their work is detailed, thoughtful, and ongoing.

As I have been reflecting on what’s happening, I begin with a look back. In the last fifteen years we have witnessed and experienced massive changes, such as: the rise of the consumer internet, adoption of cell phones by more than 3 billion people, completion of the mapping of the human genome, and cloning of the first mammals.

This thinking stretches me, but I believe it. Here’s why: information technologies now in place globally are feeding on each other, creating an accelerating wheel of advancement and creative destruction. The technologies fall into (at least) three categories, the dynamics of which are individually mostly understood, but which collectively are creating new dynamics that are difficult to fully grasp since they are evolving in real-time. Three of the powerful technological forces are:

1. IT Infrastructure— Moore’s Law type effects. This includes computing power, storage, bandwidth, and all of the derivative devices, such as an increasing array of personal computing devices (such as tablet computers) and massive scale cloud computing. These powerful effects have been running strong for decades and will continue.

2. Meta Tools-- fueled by acceleration in open source software, meta-tools continue to accelerate the pace of software development. Building on the shoulders of those that came before them, software engineers in healthy situations can be 3-5X more productive than 10 years ago.

3. Collaboration and radical network effects—Metcalfe’s Law type effects are combing with learning curve effects to create viral adoption of new methods, a catalyst for the next ratchet-up of the speed of change. John Hagel and John Seely Brown have called this effect the “collaboration curve”, when traditional learning curves are multiplied by massive scale collaboration. While not limited exclusively to the IT sector, the best examples are companies like Apple, Google, and Facebook, who often have more third-party (external marketplace) engineers working on improving and extending aspects of their software technologies than they employ themselves. They’ve opened critical parts of their systems and toppled market leaders.

These three mega-trends— simultaneous radical improvements in infrastructure, tools, and collaboration— work together to create a constant flow of discontinuous change, an “acceleratron” that may be only beginning.

The acceleratron enables developments such as:
- iphone applications being written at the rate of 25,000 to 50,000 per year, essentially none of those by Apple itself
- Google becoming a $100 billion market cap company in under a decade, while old media dies
- Amazon becoming one of the most valuable retailers in the world in just over a decade
- Wikipedia becoming the world’s largest database of actively curated and moderated content with only a few employees

The acceleratron speeds up all industries and processes. You can find examples in agriculture, education, energy, healthcare, manufacturing, and retailing.

The acceleratron's reach will remake industries in small fractions of the time it took to create them (see newspapers); it will unleash even more fantastic scientific progress (see genetics); and it might remake a “have/have not” world order to a “know/know not” world order (which will bring new issues).

Are we ready for all of this change?

As companies, countries, cultures, and citizens, are we prepared? Absolutely not. The changes will test us, strain us, and push us in entirely new ways.

Will our essential humanity, our fuzzy brains, our cultural proclivities, and our basic desires for the simple things, provide a “natural brake” to the full effects of the acceleratron? Will some communities do a better job of digesting and moderating the pace of changes than others? In my view, yes and yes.

I’m optimistic about our ability to harness the acceleratron, unlocking an exciting period of advancement and understanding, while holding on to things most dear.

I know not how to end this post. Perhaps, with this: more to come.


Credits: Joe Rosenblum, INET’s CTO, helped shape my thoughts on “the acceleratron”.
Posted by Bob Brisco at 7:00 AM