I've always found this line of thinking to be nostalgic. I believe the contrary: journalism isn't dying, but changing and expanding in ways that may ultimately make it more powerful than ever. The changes in the profession, as in so many, are disruptive and painful. But the changes are inevitable and likely lay the foundation for a better approach.

For most of history, journalists didn't give a damn about their professional standing-- they were happy to be craftsmen, in the tradition of ink-stained wretches. As late as the 1950's, more than 50% of reporters lacked college degrees. At its core reporting was (and is) dressed in overalls: it's about unearthing facts, eliminating noise, assembling context, and building insight. It's hard, honorable work.

The scaling of "big" professional journalism-- investigative teams, large budgets, and relatively leisurely deadlines-- was a modern development, fueled by the big profit growth of traditional media in 1970's and 1980's. "Big" journalism had business success (Newsweek, 60 minutes) and journalistic success (a la Woodward and Bernstein). The fruits of that era were sweet: I miss Ted Koppel's nightly explorations of the world and the heft of the weekly news magazines. 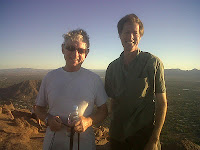 There is absolutely no way I would trade my current cornucopia of internet news sources for those "glory days". In the digital world, the reach, breadth, depth and timeliness of coverage is improving at a fantastic rate. It scales.

The criticism of the digital journalistic age is that quality is declining, specifically in these areas:
1. More amateur reporting
2. Less objective reporting
3. Less serious new coverage
4. Over emphasis on frivolous "newsertaintment" coverage

Let's look at each of these issues.

More amateur reporting. Yes, that's true. But there's also far more expert reporting now. I follow dozens of niche bloggers whose expertise massively outstrips that of the traditional media journalists they might have displaced. I mostly ignore the legions of new amateur "journalists" and find the true experts. Many of these experts had no voice before, as they had no access into the very limited "newshole" of traditional media outlets. My news and info diet is richer than ever.

Less objective reporting. This criticism rides with the amateur argument: that only professionally trained journalists that can be objective. While this argument has some merit at the margin, there is a counter argument as well. Since the digital era opens the media to more expertise, that expertise often comes packaged with a better brand of objectivity-- informed by much deeper subject matter knowledge.

Less serious new coverage. This argument says we are now lacking in coverage of the most important issues, like Middle East peace processes or inner city economic woes. I'd again make a counter argument, that as the costs of producing and distributing coverage have declined, there is more of it-- at all levels.

Over emphasis on frivolous coverage. Or, put less delicately:"we're now drowning in crap". Sigh. This criticism is true. Such is the inevitable sprawl of growth-- you get more of the good stuff and more of the bad. Both weeds and flowers multiple in the Spring. The good news is that this profusion will be mitigated by emerging "filtering technologies" that leverage human curation.

Now that the bottlenecks of printing presses and TV towers have been removed, journalism's finest days are ahead. I say this in the same way that musician's best days are ahead. The traditional work of studio musicians may have disappeared, but with the bottleneck of record labels removed, the innovative work of distributed auteurs is multiplying at a terrific rate. Making a living is certainly becoming more difficult in many fields. But this is the consequence of global competition and equal access, not signs of devolving, but evolving.

Perhaps a profession's greatest moments are when gatekeeping collapses and the market sorts out the talented influx of para-professionals and allied professionals. As exclusivity of knowledge and tools propagate, the definition of a "professional" becomes determined by the level of mastery, not by the issuer of one's diploma, license, or paycheck.

With this admittedly optimistic outlook, I say journalism's finest moments are ahead.
Posted by Bob Brisco at 5:04 AM